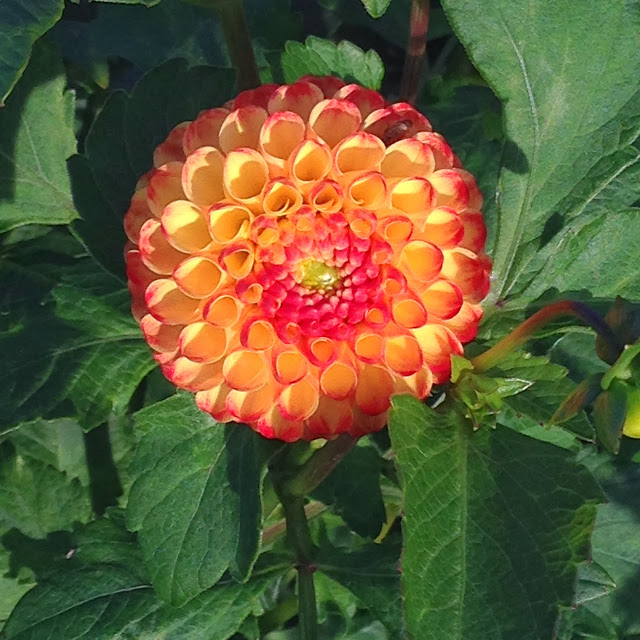 The weather has definitively turned now, the heat kicking in as the house gets below 62 for the first time this season, and so much more water everywhere. What will I do with those full to overflowing rain barrels from now until July? It's hard to imagine that anything will really need watering again. Ever, almost.

The dahlias keep coming, and I'm grateful for them. Somehow, they say "I'm sorry" and act as consolation. People say that dahlias don't have a scent, but it isn't true. It isn't the scent of a bloom, it's the scent of cut stems, sharp and green and mournful. I don't leave any outside, just keep cutting and cutting them, bunching them in vases in the bathroom, on the kitchen windowsill, at my desk, on my night stand. They are little soldiers in service of beauty, reminders that the world can't help but put good things in front of you, no matter what else is happening.

For the weekends, I hope for a break from rain so that I can put things to bed in the garden, fend off weeds and find a way to protect some possibility for next year. I just want to make room. It's hard work to do that, tiring and a little painful. The garden was prickly and sharp and stubborn all summer, my hands were always secretly wounded, little thistle bits embedded in them, a rash halfway up my arm, but so much good stuff came out of it. It makes sense to remind myself of that now. Here's what grew, and will be back next year:

- raspberries - Overwhelmed by raspberries this year, but there they are in the freezer, and there were enough to give away finally. The canes have overtaken their bed and need to be dug up, transplanted, thinned, tamed.
- strawberries - They are always eaten mostly by the slugs. This year they were plentiful enough that there were even a few left for humans though.
- crabapples - I finally got out the loppers and snipped off branches from above the mini barn, having found a poached crabapple recipe I wanted to try. They were surprisingly addictive, fussy to eat, clovey and complicated.
- apples - There were three big apples on the old tree by the greenhouse this year. Two were lost in piles of leaves after not being picked soon enough. I found them half hollow and slug-filled and hated to throw them out. The last one was picked with a ladder and eaten, tart and rare and delicious.
- pears - I experimented with thinning the tiny fruits as they started to grow, but once they got big enough to start dropping on the ground, you couldn't tell at all which branches had been thinned and which hadn't. One of the trees was loaded with fruit, just started to lose the gnarled, scabby look it had last year. They are all waiting in the kitchen, half in the refrigerator, half in paper bags on the counter.
- currants - In early spring, we planted a little black currant bush. It yielded a surprising amount of fruit, which I stewed into a syrup that I ate in plain yogurt for breakfast.

- cherries - So many blossoms and so much green fruit on the tree, but none eaten by people.
- blueberries - There are four little blueberry bushes now, two by the greenhouse that need to be moved, and two by the back fence. They are starting to pick up speed and there were several weeks where there were always ready berries.
- horseradish - Tom planted horseradish, after I said I wanted some, and then I dug it out and threw it over the fence, thinking it was a valueless weed. When he asked what had a happened to it, I remembered and went back to stick my hand through the thistles and the fence to retrieve it and tuck it back in. I was surprised how well it grew in spite of this. The truth is, it is weed-like.
- oregano - Every time I picked raspberries, I smelled spaghetti sauce as I brushed past the overgrown oregano bush. In spite of this, it rarely found itself into a dish.
- asparagus - The new crowns I planted this year didn't do as well as I might have hoped. Last years yielded more stalks than I expected though. I let them be, hoping for a plateful next year.
- artichokes - Only the raspberries have flourished more. Everyone who came was sent home with a few, and still there were more and they bloomed purple and tall and are there still, color long gone now.
- mint - There is always mint. There was mint when we came and will be mint after. It made its way into sun tea a few times, and generally behaved a little better than it had last year, not crowding out nearly as many starts.
- blackberries - The blackberries take up as much room as the raspberries but never taste as good. Tom rescued the pear trees from them this year and now the vines seem resigned to living along the fence, encroaching less and less each year.
- nettles - The first thing harvested every year, they made soup and seemed to contain the promise of everything you could ever hope for. Appropriate then, that they are also the thing that stings. You have to know how to make use of them, and I do.
- sorrel - Sorrel goes well in a nettle soup, and is an even more aggressive grower, at least where I have planted it. It's hacked back regularly, and doesn't care at all.