No, I Really Did Work on The Manuscript 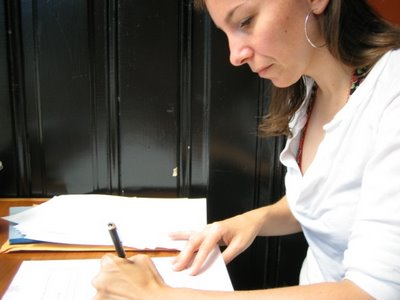 It's true, I did! Okay, right after this picture was taken, I stopped writing whatever I was writing and goofed around with Susan a bit, but I had already been at the coffee shop scribbling for a while when she took this. And I will be tapping on the computer for more hours tonight.

Which makes it a damn good thing that I LOVE the manuscript. Don't take that in the "I think I'm such a great writer" way, because that's not how I mean it. It's just that something happened, and now I live in that place that writers talk about, where the characters take on a life of their own, the story takes on a life of its own, and you know that when you sit down to start working on it, something is going to happen.

Last night, on a break from the manuscript (lots of breaks, very important when you are in love with your own work), I watched one of the DVD extras from Lost in Translation - the making of, or whatever. Sophia Coppola was talking about how happy she was that she got to work with Bill Murray, and how she couldn't believe that she got to dress him just the way she wanted to, and have him sit on the hotel bed looking glum the way she imagined, like in that photo for the poster, and I just thought "yeah, that's exactly how it feels". I love the manuscript like it was my child, the way Bill Murray's Lost In Translation character says that your children grow up to be "the most delightful people you've ever met".

Maybe all of this is really vague if you aren't into writing, but I think most of us have something we do that we can look at and say "I like that" about. I know you have that as a designer, Ali, and sometimes I also feel it about my knitting.

But feeling it about my novel is just a different thing. It came from me, but it has this weird life, I can step outside it, I can read the book and appreciate it as a reader. I think a lot of this is just a meditation on the magic of language, the way you can pick a word, but the word has an iridescence to it. It's as though you picked red, but what you got was red underneath, with a lot of other colors that you didn't anticipate, shimmering over the top. It has more meaning than you necessarily put in it - the words just give you that. This especially happens when you get to the point where your piece is long enough that the old stuff you haven't touched in a while is almost new to you.

People ask me what the book is about all the time. After last night, I wanted to tell people that it's like the Lost In Translation of novels. Two people who are lost sort-of bump into each other and you see these little sketches of their worlds.

I hate to say it, because I worry what people will think, but it's also about grief. A lot of loss in this book. But it's also my attempt to talk about some of the things that hold me to this earth, and my two characters are like the parts of me that are not sure they want to stay here, but do. I started writing this book when I was in the worst part of things with Steven, and while I knew I would never hurt myself, for various reasons, being close to him meant being close to suicide as a question people ask themselves about the world.

I haven't been close to that question much in the last ten years, but before that, I put myself in its way a lot. I was close to that question when I was tending bar in NY, when among my regulars was a man who would sometimes go out into the night, quietly, and lay down in the middle of 2nd Ave to be run over. His fellow drinkers would go out and drag him back into the bar, but he was really only coming inside to kill himself another way, wasn't he?

Only a few years later there was Pauly, and there are numerous other people I've been close to whose grip on any kind of healthy existence... well, if you said that grip was slipping, you might be accused of being WAY too optimistic.

It isn't an accident that the only men in the manuscript so far are ghosts. Stephen King says that he writes about his worst fears, and with this first book, in some ways I can say the same thing. I have always felt that I could help my girlfriends, that we made a vital difference to each other and could keep each other going through the worst stuff. And my girlfriends have seen some hard things, every kind of loss. The kind of loss that can make me tear up now just thinking about it, more than a year away from most of it. I'm sorry to say that, while I have some kind of faith that my girlfriends and I can keep each other going, the only really close friend I've had who committed suicide was a woman.

But the original seed of fear that this book started with has to do with how hard it's been to be close to men that I didn't feel I could do much for. Or at least, that was the surface thought, until I got deeper into the book, and realized that it was about something else, something that I might talk about some other time.

I was thinking about all this when I drove to work this morning, pondering the finishing touches I wanted to put on the love letter to Nate. I was thinking about the love letter to Nate and the love letter to Bobby, and the unwritten love letter to the cowboys, and I realized that these guys are showing up as a kind of counterbalance to the ghosts in the novel. I was inspired to write about these men who give me some kind of delight with their existence, and I like the pattern that writing about them makes. I like knowing why they are important to me, what they mean in my world right now and why I feel so grateful to them. What matters to me most right now is not my relationship to any of them, but that they exist.

Maybe the second book will be short stories, after all.
Posted by Heather at 8/07/2006

Okay, you made me cry a little bit in my eyeballs.

And I do think it is crazy how sometimes, a long time after you've written or made something, you can think really? I made that?

I can't wait to read all the great things you have to make.

Love You, my special friend.