Just Gonna Have To Settle For Bikini and Mittens 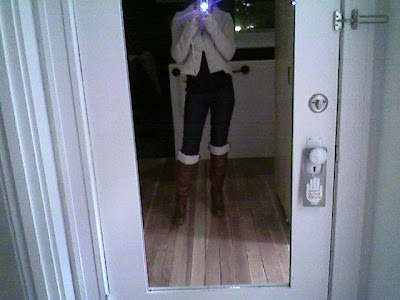 Operation Snow Bunny hit a snag this morning. We were all set with our new fantastically hideous boots from a vintage store in Portland, until we realized how damn heavy the things were. Look at them - you can tell they aren't the kind of thing you want to have in your carry-on, can't you? And even more than wanting to look ridiculously silly in the snow, I want to avoid checking luggage. So the boots were sacrificed and I will just have to hope that you will do you your part to appreciate them here. Especially since last night when I considered wearing them to the new vodka bar I like, Bobby said "Mmmm... no." He was right. But I still love them. What, you say "Wear them on the plane?" Ha, right, um, that doesn't work when the only pair they had was a size smaller than you wear, but you bought them anyway. These boots are for a show pony, not a workhorse. At the airport, you gotta be a workhorse.
It's going to be quite on the blog here for a few days. Ali is moving into her new digs, very exciting, but not very blog-conducive, right? And I'm on a plane for ABQ, where Lesley will pick me up and whisk me off to her casita. She promises that there will be lattes before the long drive to Creede the next day, where it is -2 degrees, but the wolfhounds, and the wood stove and the stovetop espresso maker wait. Aren't you glad I'm going to the ranch? If only for one night.

The second day we'll head over Wolf Creek Pass and on to Pagosa Springs, which is how this whole bikini and mitten thing came about.

I think you know, I'll report back. In the mean time, everyone have a good weekend, and I think this post says it. Give it a little thought, will ya? That man was Love.