What Is Typical of Me 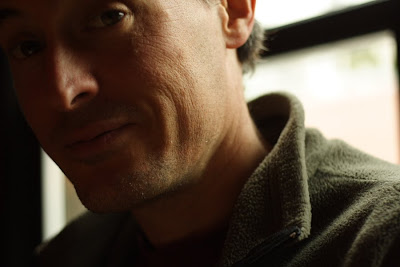 In photos? People, backlit. In Black & White I, this doesn't work so well. I think tonight Jahnavi told me my highlights were blown out. Sounds good, right? Like, if it was your hair, that would be good? Well, no. The evaluation part of camera class has been a little disheartening, so far. The rolls I took last week, just not that interesting, not what I pictured, but no interesting mistakes, either. Decent film camera? Just not that forgiving.
But I get so excited in class! We learned how to make prints tonight. and I squealed when the TA chose the negative I would be allowed to print, then again when the light from the enlarger first shined through the negative in its carrier, giving me my image, large for the first time. I squealed again, multiple times,  as Amber's wry smile emerged from the tray of developer. I probably squealed as much as I agitated. My classmates ask me "Are you excited?" as a joke.

So I've been thinking, as is typical of me - what's up with all the classes? And I got it, last night. It's just progress. Always something that shows progress. That's what I care about most.
Posted by Heather at 4/13/2010

Oh I love this!!!! I am so excited (and a little bit giddy) for you. I know that feeling, when you've been learning something on your own and tinkering with it and enjoying it but then you find a teacher and your world expands all over again. That is such a great feeling, and you captured it so much in this post. I can't wait to hear more. I really can't. (Plus, I'm a little bit jealous of that feeling.:) )

i agree. showing progress is the most important thing! :)

and that is why i got involved in the photo industry... that feeling, i want it every day!