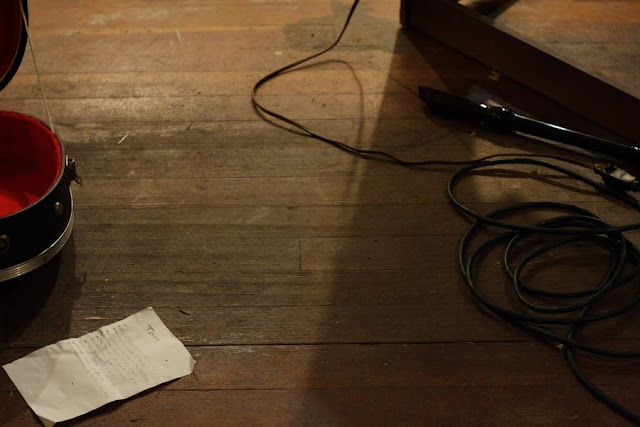 The show they were practicing for was at the Longhorn that night, for Will's birthday. Will had enough beverages to forget which burger was his and accidentally eat the rest of James' but no one really cared. Christina and I sat together and tried not to get distracted by the National Spelling Bee which was on mute on all the TVs in the bar, but it's hard when those moms are so intense. Even on mute, the tension is nearly unbearable. Still, that seemed sort of appropriate, since Jess got so nervous for the show that for a straight hour she looked like someone had just run an ice cube down her spine, and when someone asked Tom if he wanted a drink, his blue eyes went all saucery and he said "NO!" and when someone asked him why, said "Would throw up!" James just wrote a bunch of copies of the set list and I begged him to play the quiet quiet song but when he told me he wanted to keep the stress level down for Tom and Jess, I had to agree that was probably a good idea.

Their set was great though, they sounded so good and dear, and the bar, which usually closes early on Sundays, was packed. After they played, the crowd called for an encore and Tom looked like he was having just about the most fun I've ever seen him have. Klaport was there from Vietnam and he recorded the show on his little digital camera in between the bobbing heads of two guys at the table in front of him. Tofe surprised them by showing up and Brandin popped up at one point during the show to ask if the band would play at his place next weekend, and James said Sure! as though Tofe's birthday party hadn't been planned there for months already. But it felt like that kind of night, where you could ask for what you wanted and get it, which is why the beer pitcher that was passed around with a sign that said "The Hat" got passed around and filled, only to be emptied again to pay for everything else we wanted, fish sandwiches and fried oysters and salads and Jameson on the rocks or Bud Lite or in my case, more ginger ale.
Posted by Heather at 6/09/2010

happy for someone enjoying small moments that they can reflect on them like this!