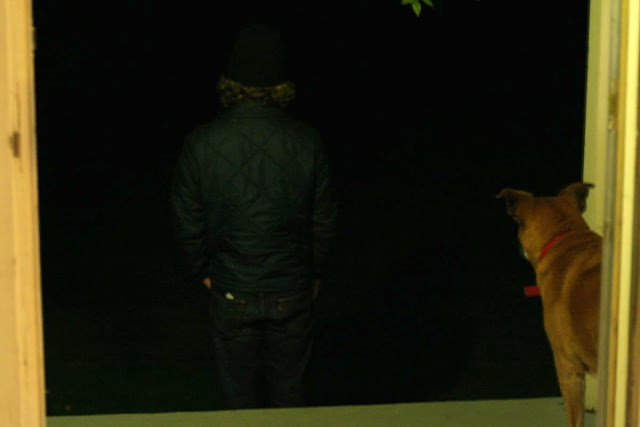 Neither one of us was sure how the bird got in the house, but there it was, perched on top of the refrigerator. It was what dad would call an LBB, or Little Brown Bird. Officially, you know. Tom and I had been out on the front porch, just looking at the night, the wisteria growing up over the roof, lovely and needing a trim. We didn't know there were birds sleeping in the wisteria, and couldn't see them, that's how thick it is there. As we looked at all the little parts of the house, we kept flushing them out of their night-time hiding places, rustle of leaves, rustle of wings. It wasn't until after I had gone inside to finish an email. and closed the door, that Tom discovered the indoor bird. Maybe it came in when I was taking photos of Tom and Emmy like the one above, too dark, blurry, but to my liking anyway. Maybe Tom let it in when he came in, though I doubt it. All we had to do to get it out was walk towards it - it let out one sharp sweet little chirp, tart like small candy, and flew directly through the entire length of the house and out the front door.


I'm starting to see photos again. My film cameras are still mostly in their bags, but I've started to make a move for the digital camera more frequently. It's just expedient, and good in low light, in a way. I went running for the first time in ages today, and kept looking at the red barn with the fish sculptures on the side of it, the buildings half-hidden by the height of corn stalks, the way the yellow flowers looked by that metal gate that led to the corn fields near the dike. The farmhouse and life there is presenting itself to me in different ways too, now, the way Pam's ranch did when I stayed there and took photo after photo, every day, little variations on all the corners of the land I liked to look at.

So many things made it a good weekend, but one of the nicest things was just looking, and seeing.
Posted by Heather at 9/13/2010