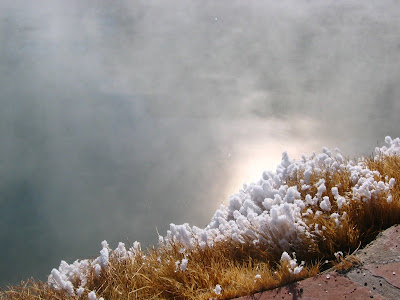 I didn't have a good camera. I didn't even know what a good camera was. I liked taking pictures, though, and when I look back now, there are still photos I like from back then. Like this one, frost on a few little tufts of grass next to the hot springs in Colorado where I spent a night with some of my favorite friends three years ago this January. The hot springs in the freezing night air, steam rising from them - heaven. Those friends, also heaven.
We picked words for the year while we were there in Colorado. What did I chose then... bravery, I think? It worked. It was a year when I needed it, and it came, just enough. I haven't picked a word for this year yet, I'm at a bit of a loss. Two weeks in and it's a mixed bag so far.

When Tom and I walked outside this afternoon, there were frogs croaking everywhere, and a bald eagle in the tree, and I spent a roll of film on him and Emmy and it was almost 50 degrees, I think, but more importantly, it was not raining. What do you call the pool of flood water that lives behind our field for these wet winter weeks? There is some word between pond and puddle for it. Sometimes, I just struggle for the words. Today I tried to write an email that felt important, and finally, after writing and deleting and cutting and pasting, going away from it, coming back, I just gave up.  It might be one of those situations where saying little is best, and at this point in my life, I can live with that. I'm better at that than I used to be. That was how I ended up outside with Tom and Emmy - I had been drafting that email, until all the rewrites made me realize I should go outside and walk around, and then see how I feel.
When I came back inside, I felt the same as I had before, at least about the original email to which I was trying to respond. Wounded, incredulous, disappointed. A little scornful. Still, calmer. Resigned. Tom made bread and I watched the Golden Globes and ate tamales for dinner and drank some fresh apple cider and did the dishes, a few at a time, never quite finishing the whole sinkful.
Posted by Heather at 1/17/2011