What's wrong with this picture? 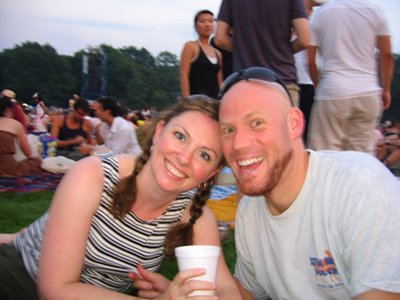 So off we went to the Philharmonic in Central Park. Aren't we classy? I know you're looking at that picture thinking just how classy we are.

It was hot, hot, hot. We thought that this would dissuade some of the usual thousands of people from showing up. Wrong, wrong, wrong. You can see from the above photo just how wrong we were.

The Great Lawn was packed. People had some pretty elaborate setups too, with tables, candles, iceboxes, lounging chairs and decorative serving bowls for their picnics. We kept it old school with a blanket, chips and salsa and guacomole (from Whole Foods yo!) and some frosty beverages that had spent the day chillin' in the freezer.

I can't say that we listened to the music overmuch. We were distracted by the antics of the three-year old topless girl on the adjacent blanket. And the contact high from the ganja being smoked on another blankeet was pretty diverting too.

It didn't seem that anyone else was paying much attention to the music either until Bethoven's Fifth was being played. Then everyone was whooping it up because they actually recognized it! And they pumped the volume waaaay up. The Great Lawn was rockin'.

At the end of the concert there was a fireworks show - not as great as LaConner, but then how could a burg like Manhattan expect to compete with the reservation? Certainly the fireworks did not go off all night, like in LaConner. And there were no exciting brush fires, like in LaConner. And we didn't have the charming bartender from the LaConner pub, but all in all it was okay. Oh, and we weren't playing Crazy Eights - so LaConner fireworks definetly beat Central Park fireworks hands down.

Then, after the fireworks, we were loitering - waiting for most of the hordes to depart - when 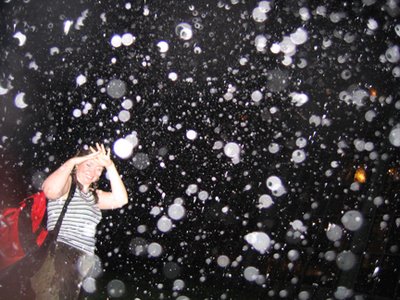 The water saturated skies opened up and let loose upon us.

As most people who live (or have lived) in New York know, summer rains in New York are like mini-monsoons. They drop water like buckets - torrential buckets - and blow themselves out in half an hour.

If you are lucky enough to be indoors or near shelter when this happens, you can stay put and wait it out with a minimum of fuss or dampness (provided you remembered to shut your window, but that's another story). However, if you are caught out in the open - in the middle of the Great Lawn, for example - there is really no hope for you.

People were running around like lunatics with plastic bags over their heads, sheets draped over themselves, fold-up seats as makeshift umbrellas and many equally absurd attempts to stay dry.

Euge and I were just laughing. It was HOT WATER. Like being in a shower. And it was everywhere, there was no escaping it. You could really only embrace it. 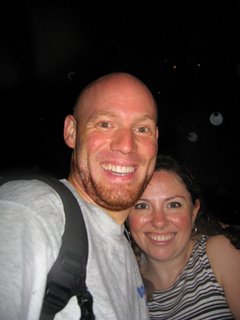 These rains are actually one of the things I love most about summers in New York. They are so wild and brief. Like the teenage boys of the weather spectrum.

People were streaming out of the park - ignoring the beauty of the water cascading down the glass windows of the Temple of Dendur in the Met, ignoring the vast lawns in favor of the water - and people - logged paths. Trying, ridiculously, to keep dry. It was hysterical.

We caught a bus on Fifth Avenue, along with 60 other soaked individuals, and laughed our way home. It was almost the best part of the evening.

That is a charming story!