Buy a Banana From a Beatnik 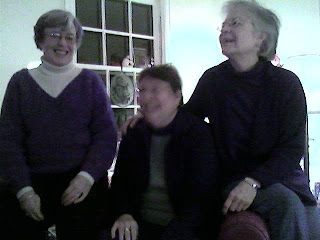 I love this photo even though it was taken with a cell phone.
Mom and I drove down to Portland on Thursday morning to visit with her girlfriends, Ross and Margie. Mom, Ross and Margie all lived together in San Francisco in their twenties, so I was hoping for some good stories, like the one about the catch phrase that appears as the title here.

I'll admit I was a little disappointed that several decades later, they are still the best keepers of each others secrets... maybe there was one little story about a motorcycle trip with a guy named Bill, and some stuff about using tissue paper for curtains because they were too poor to buy any, but I know there was a lot more they didn't give up. Especially since from my bed on the couch in the living room, I listened in on the gossip that happened in the kitchen the next morning and the phrase "love child" was used more than once, and there was also something about the police, a mental breakdown and a peignor. Don't worry, none of the ladies in the photo above were the protagonists of those stories.
Mom had already told me that the blog reminds them of their adventures in SF, so I knew that mom had (surprise!) passed along the blog address to Ross. I have to tell you, she is a very high quality fan to have. Before we arrived at her pretty Portland home for a fantastic dinner, I was told that she reads the blog every morning - sits down with coffee, the New York Times and Shameless Self Promoters. She's one of those people who does the NY Times crossword puzzle in pen, and can sit down and read a novel in a day. She was charming, as was her husband, who held his own at dinner with these, um, exuberant girlfriends. And since I have, for some reason, been having a hard time with the blogging since I got back from CO, it was nice to have the encouragement. Ross, I'll try not to let you down!

Margie is her own fabulous story. I confess that one of the things I loved most about her was that she swears like a sailor, always to maximum comic effect. She's a knitter too, and I suspect that she could teach this Stitch and Bitch generation the meaning of the phrase. I mean that in the best possible way, of course. Every year Margie makes herself a sweater for her birthday. I love that tradition. She also took us to the best french bakery and to a yarn store that I would never have found without her. You know how that will endear me to a person. And then there was her little Lola. Oh Lola! Here's more Lola. There's no such thing as too much Lola. 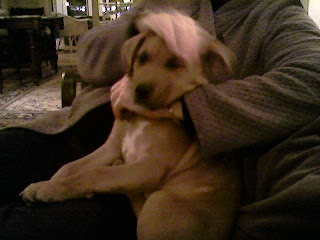 sounds like three great ladies or maybe broads is a better term.

Were their pictures from their Lawless Youth? I want pictures!