Better Late Than Never, Yo

I know that I have been quite absent from this place for the last week, which is especially egregious behavior after I promised to blog the Oscars… But I am here now to opine on the subject, belated as my opining may be!

Overall, I thought this was one of the best Academy Awards Shows in my recent memory. I love Jon Stewart, but Ellen comes across as such an enthusiastic, genuine fan of the movies and movie stars that her excitement is infectious. With JS, the political commentary sort of distracted from what is supposed to be a fun, frivolous evening.

Anyhoo, I also thought that the pacing was really tight, which was nice, and I was glad that they didn’t do that weird thing where they had all of the nominees (except for the famous actor/director categories natch) standing together, for one winner to be singled out. That was downright awkward.

The little film of the nominees that they did at the beginning was brilliant, and gave the nominees much more of a voice than if they’d been standing around looking like audience members on the Jerry Springer Show waiting in line to ask the transsexual lesbian grandmother why she decided, at 86, to become a he.

I wasn’t as crazy about the shadow dance troupe with their interpretation of movie titles… mostly because they seemed so random. And it was a little creepy.

And I thought that the staging for the Best Costume Displays, the little vignette-like scenes they set up, were pretty cheesy and didn’t really show off the costumes to their best effect.

Which, of course, brings me to the most important aspect of the evening. The fashion.

Now, I know that there has been a lot of discourse about Jennifer Hudson’s outfit and how her little bolero looked like something from Star Trek, or the Coneheads… but In My Humble Opinion, her outfit was not the most annoying of the evening – though her hair bothered me even more than the shiny gold tanning reflector gracing her shoulders. 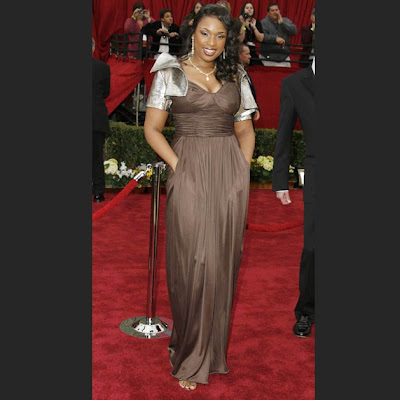 The most annoying outfit, I believe, goes to Kirsten Dunst. 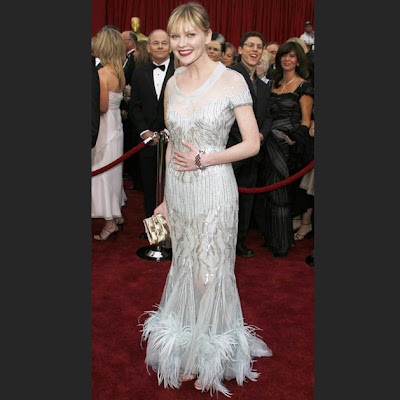 In the immortal words of Charlie Brown “Arrrggghhhhh!!!!”

She committed the same fashion sins she always commits. And I don’t understand why someone hasn’t strapped her down and forced her to watch a slide show of her bad fashion choices until she has an epiphany, or her eyes bleed.

What is my problem, you may ask? Her boobs.

She is a young, luscious, beautiful girl. But she does not seem to understand the proper use of undergarments and so her boobs appear to be the pendulous, metronomical appendages of a 50-year-old mother of five who breast-fed her kids until high school.

Though, one would assume that such a person would understand about the proper application of underwire.

Also, one would assume that Karl Lagerfeld – the man responsible for her gown would also understand the benefits of a little lifting power. Though he did also design the unflattering boat neck, so who knows what he was thinking/smoking when they were doing her dress fittings.

Also, her flat hair. Why always the flat hair?

I cracked up a bit a Cameron Diaz’s wrinkly white dress. It was like a cry for help. 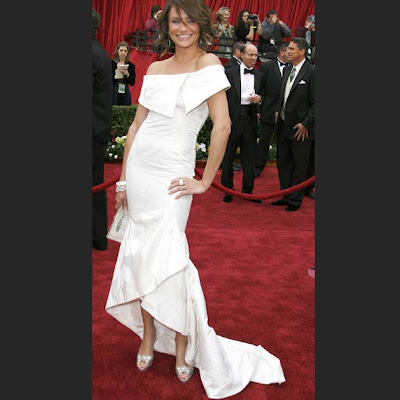 “Look Justin, this is what a bee-yoo-tee-ful bride I could have been!”

Ladies, never where white to a major event just after you’ve been dumped. Especially if it’s all wrinkly. It makes it look like you were already planning the wedding and had the dress in cold storage just waiting for the right guy.

The trends I noticed? 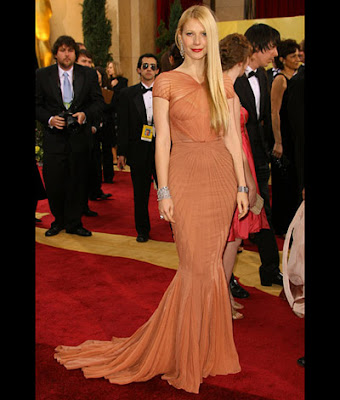 Asymmetry. Necklines, hairstyles, hems, and, sadly, boobs. There seemed to be lots of ladies with one boob hiked waaaay up to their nostrils and one in a more natural position. Once again, poor undergarments to blame, I am sure. Of coure, Gwynnie does the hair just fine, and her boobs are perfect.

Nipples. Good Jiminy Baby Buddah! Have these women never been to a public event before, where the temperature was lower than eighty degrees? Celine Dion! Jessica Biel! You should know better! This is not your first time at the rodeo, ladies!

I refuse to illustrate the point. 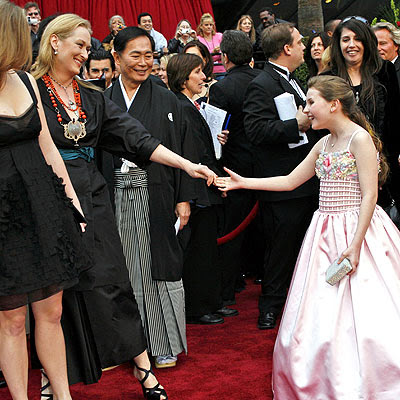 Though, actually, young Abigail looked almost too age-appropriate in her dress, which resembled an Easter Basket to a degree that is only acceptable in fifth grade school plays. Where you are actually playing an Easter Basket.

I won't say anything about Meryl Streep because The Devil Wears Prada was brilliant and, well, she's Meryl frickin' Streep! 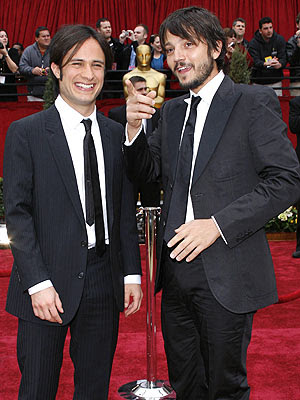 And, for the men, a certain lack of hygiene. The greasy hair (Leo!), uncombed hair (Phillip Seymour Hoffman!) and lack of shaving (virtually everyone!) were shameful. Really, all you guys need to do is look in the mirror and think:

“What would George Clooney do?”

We should have t-shirts made.

Sadly, I have no commentary on the recipients of the awards themselves. Because I never go to see movies.
Posted by LadyGripe at 3/02/2007

Oh excellent, top notch post. Nice to have you back.