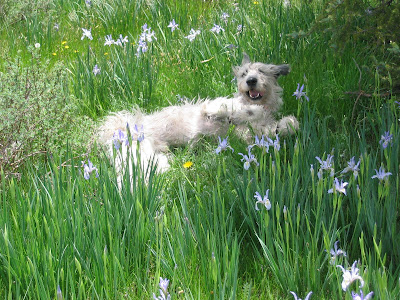 We had a very indulgent day at the ranch yesterday. Full of pleasures! When I came out to feed the puppy breakfast this morning, I was surprised that there wasn't a single dog on the porch. Ordinarily, they are all there in the morning. Still, they came as soon as I called, so I didn't think too much of it. Until a few minutes later when I looked out and saw them all digging at a particular spot in the grass in front of the house. That can only mean one thing - something dead. And it was, another elk leg. One of their favorite things. It may sound dreadful to you, but they like it. What they do not like is when I take the bits away from them, but it never fails to amaze me that they don't bite my hand off when I take their prizes from them. I think that's just what I said last time. But really, not even a little growl! Just proof of how sweet they are.

Then it was time for Fenton to get his stitches checked. When I asked Doc Howard if he thought it was barbed wire, he looked at Fenton's leg and pointed to another little scratch, and then said, "See, we can tell if it's barbed wire because of the mark it leaves." Then he paused and said "It'll actually say 'barbed wire' right here..." Still straight-faced, as was the girl helping him. Sigh. I'm not THAT much of a city slicker. When I left he said "But what I want to know is - Are YOU staying out of trouble?!"

But of course, for once, I am. 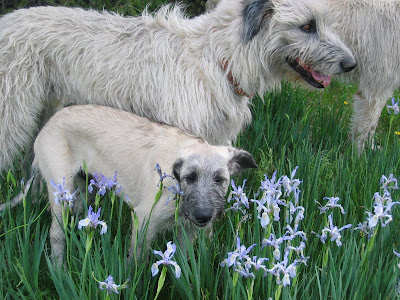 After Fenton's field trip, we had a nice walk, where everyone played in the stream and Fenton did a lot of happy rolling, celebrating the success of his fancy stainless steel stitches. It threatened to rain on us the whole time but never did.

So pretty - wild irises? They're gorgeous.

In my vicarious fantasy,when Doc Howard is saying those things to you, he's saying them with the shyness and voice of Robert Redford and he looks quite a bit like Harry Connick Jr. in 'Hope Floats', not the Will and Grace version.