What We're Doing the Rest of the Time 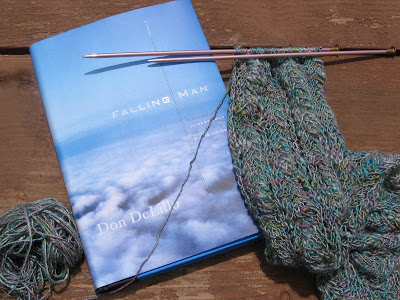 Well, it isn't all fun and rodent mortuary here on the ranch. Sometimes we get down to serious stuff, like novel reading, and knitting. (and just the teeniest bit or writing) Here are the latest FOs (Finished Objects, for those of you not up on the knit blogger lingo, Hey! don't say I never taught you anything). Falling Man and a silk lace scarf.

I promised more book stuff for the blog, so I felt like I had really accomplished something when I finished Falling Man a few days ago. Unfortunately, since then I've been struggling with what to say about it. I had never read Don DeLillo before, and had some vague impression of him as a popular man's man kind of writer, though I couldn't really say why. His new novel takes place in the aftermath of 9/11, and I didn't exactly want to read a 9/11 book either.

Still, it didn't take long for me to get into it once I picked it up. My favorite books tend to be somehow deeply internal, where you see or hear a character in solitude. (You can see why I'm a Virginia Woolf fan, and why I am writing a novel where nothing much happens.) Anyway, Falling Man had that quality, a feeling of characters dissolved in deep solitude, though it was also filled with compelling connections between the characters, most of whom are part of a family living in New York City.

My Virginia Woolf fascination is also a symptom of my desire for every novel to be a meditation on time in some way. Falling Man satisfies that by being an illustration of people moving through time in that strange way you do after a traumatic event. There was nothing histrionic or sentimental about the book, though, and that was what I feared when I thought "Hmm... not sure I want to read a 9/11 book." In fact, Falling Man felt very restrained to me - there's a great section, talking about a game a kid is playing... wait, why don't I let you just read it:

The kid was trying to speak in monosyllables only, for extended stretches. This was something his class was doing, a serious game designed to teach the children something about the structure of words and the discipline required to frame clear thoughts.

Oh, and then there's a section just a little farther along that you have to read - it illustrates some of the rest of what I like...

It was Keith as well who was going slow, easing inward. He used to want to fly out of self-awareness, day and night, a body in raw motion. Now he finds himself drifting into spells of reflection, thinking not in clear units, hard and linked, but only absorbing what comes, drawing things out of time and memory and into some dim space that bears his collected experience. Or he stands and looks. He stands at the window and sees what's happening in the street. Something is always happening, even on the quietest days and deep into the night, if you stand a while and look.

Of course the word game played by the kid, Justin, makes you very conscious of the choices DeLillo is making with his words, and I was left admiring how he was able to capture the kinds of thoughts that you barely realize you are having with only the simplest language.
The part of the book that I'm left wondering about now that a few days have passed are the sections where we get the close third person for one of the terrorists, but we can talk about that after you've read it, right? Let me know when you're ready!
Posted by Heather at 6/28/2007

Yes, that second quote is a good one. My likey.

I've always wanted to read Delillo, and you've certainly made me interested in Falling Man. Plus, it looks thinner than most of his other novels. :)

Thanks for the great review, Heather. Keep 'em coming.