On No Longer Being Able To Spell 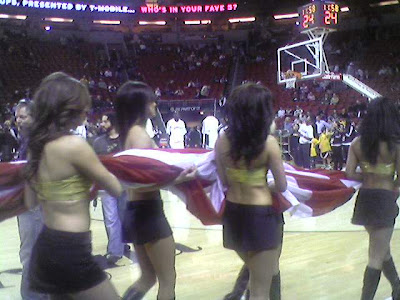 This is how close we were! So close! Too close.
Every time I think I'm tired, I just think about the twins, and realize... I can still hold my head up, right? Must mean I'm not so tired. On the other hand, I just looked at the word "mean" and wondered if that is really the way you spell it... I am tired. I just am.

I can't blame it on anything but fun stuff though. Tonight it was courtside tickets to see two of the worst teams in the NBA. God that was fun. I don't care how bad the teams are, I like getting to go in the fancy back entrance and parading through the elaborate spread they've got going for the big spenders. Did you know about that? It felt all top secret. It's free! Licorice ropes! Chocolate covered strawberries! Cracker Jack! Roast beef! It's crazy.

I went with Peter, using the company tickets from the company I worked for before I ran away to the ranch. When Peter and I worked together, I used to get on his case for always looking like he dressed out of the hamper. "Look at you!" I would say, "Is this how a VP dresses? There are holes in those jeans!" And then he would giggle his mad scientist giggle and we would head out to his car, a big Mercedes sedan that often refused to go into first gear. There was a little Japanese restaurant where we would eat lunch, Peter usually getting some weird special because he likes to try new things and asking the waitress about her personal life. I like that about Peter. Always up for an adventure, and always curious. That's how he gets all my secrets out of me. He just pesters me until I tell all.

One thing that's important to know about Peter is that he has a completely naive way of delivering a line. He says everything without a trace of irony, all earnest and goofy. Tonight was no different - he was a little mischevious about the dancers, asking me, "Heather, how come they are all the same color? How do they do that?" and then when I told him it was probably spray tan, he said "Heather! Ask them what color the paint is!" Then the mad giggle again. When they came out and sat in the seats right next to us, he said "I really want to talk to them. I think I'm gonna!" and then leaned over me and started asking whether it was a full time job, and then whether any of the dancers were also scientists. He observed that the dancer he was talking to had an "outie" and asked me if I have an innie (how the hell do you spell THAT?) or an outtie. I refused to tell him, on principle. He managed to get it out of me in the third quarters, though. Then he told me which one of the Clippers he thought was the best looking. "He could be in a magazine!" he said. But when I asked him which dancer was the best looking, he said he couldn't decide because he couldn't tell the difference between them.

Do you ever sleep? Do you EVER just relax at home alone? My life suddenly seems so uneventful.