One of the banes of my existence is my hatred of flash. And the way bars are just always too dark for non-flash photos. The truth is, I don't really have a photo for this post, but I can't in good conscious present you with a clump of words and nothing to look at, so I give you Ryan. 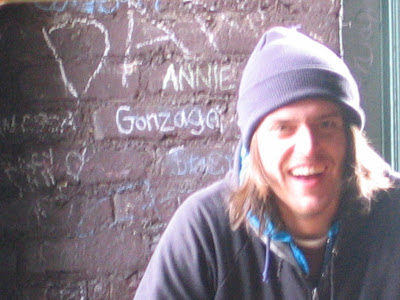 Why am I giving you Ryan? It's about the Cowboy Cha-Cha, really. I took my camera with me tonight when I took off for the Little Red Hen, but when I got there, I had to just put it in the glove box, because the Hen, in addition to being completely lacking in natural light, is really about something you just can't see. It's true that I love to sit on a bar stool there and see things. The interactions between people, the light way a woman rests her hand on a man's palm as he leads her out onto the parquet squares, the way she curves her fingers over his shoulder as they start to dance. I love to watch the movement on the floor, check out the footwork, the way one person kicks up their heel on the second quick step, or the way some people just glide along, no discernible steps, while others seem to sort-of nibble up the floor with the little moves they make on the balls of their feet. But the fun of that just doesn't compare to having someone take your hand, and being led out there yourself.

That's the part you can't see, the best part, the head-spinning twirl of it, the way something clicks and the dance that you had to count out at the beginning of the night is just there, in your feet, going in time with the music, without your mind having to work on it at all.

Ryan's been my dance lesson partner for the last two Sundays, and knowing me, I'm sure you won't be surprised to hear that I love him a little bit. Don't get me wrong, this one is sweet, but I think it's partly that sweetness that makes him Trouble for the ladies, and, this week, I'm old enough to know better about that. I've been thinking of him as, like, my cute younger cousin or something else that means I have to watch it to keep myself from being too bossy with him. I can get that way, you know.
When I was a regular at the Hen before, the guy I did lessons with was someone who had been a regular for a while before I was, so I never really saw a man learn how to lead. Seeing it now in Ryan, I have to tell you, there's a special kind of pleasure in it. From the beginning, he's been super earnest, totally immersing himself in the whole thing, talking to the instructor, asking advice from the older woman who took him out on the floor saying "You need to dance with a lot of different people!" In between songs, he'll pull me aside, saying "Okay, let's practice for a sec..." and persuade me to work on the footwork in a corner, talking through the steps and laughing when we screw it up.
The first time we went out, he took his beer out on the floor and the instructor took one look at him and stopped the whole thing, calling out - "Oh! Major Party Foul!!" A few seconds before, I had made a small comment about beer on the dance floor, but he didn't quite get that I was serious about it. So when she corrected him, I laughed and said "I told you!" He was horrified in the most charming way, said "Sorry, sorry!" and scurried off the dance floor to set his beer back on the bar. I think he sort-of became a pet of hers after that, especially because later he asked her to dance, and tonight when we walked in, she gave him a big smile and said "You're back!" She's the kind of teacher who loves to see her students soaking up the lessons.
He's been like that, and he takes correction well. He listens when you tell him where it is customary to make eye contact, stands up a little straighter when you tell him that he has certain natural talents, a nice way of holding his arms, or good definition to his steps. Tonight was the second time we learned the schottische and it was a completely different Ryan out there on the dance floor. The first time we went, I told him that the third lesson would be the one where he really got it, but I was wrong. Maybe it's because he's a drummer, but for him, it all came together at this second lesson. At first, it was just that he was getting the moves right, step scuff, etc. But once the music came on, it was clear that something else had happened. He wasn't just lifting his arm over my head as I turned, he was turning me with that lift, keeping me on track with the pressure of his palm on mine. I could have been anyone who knew the dance a little, instead of the older cousin who was trying to help him along as he learned.

Have I mentioned that I've been crabby lately? I have. With some time off from crabbiness for the LA trip, but once back in Seattle, the crabbiness was right back on me again. This whole Hen thing, though, it's been counteracting that, thank god. Dance lesson nights, Tuesday and Sunday, stand out in my mind, like stepping stones to a better mood.

The only thing I'm left wondering is - where the heck is Dakota? 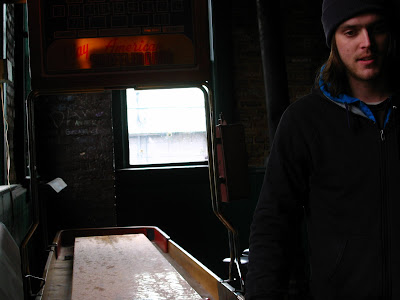 Oh! I'm SO very there in spirit!And...I'm so jealous! I might have better luck coming on a Tuesday here and there than trying to sneak out for a Sunday eve...which due to internships, work schedules, and the crazy schedule we've been keeping, has become our only 'family' day.

Would I find you there THIS Tuesday perhaps?

I'm planning on it!

...and making a surprise guest appearance tonight...my gentleman! He's coming to redeem his previous Hen antics from years past...he'll be leading tonight, regardless of the outcome :)