More of What We Wanted 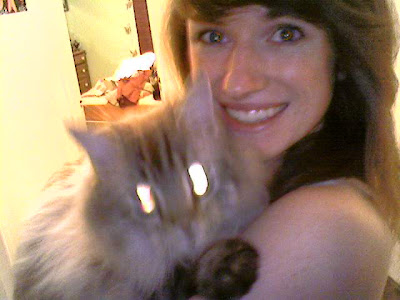 Lindsey wanted to make a good mix CD. Dena wanted to make the list that would keep us from regretting anything and Kate wanted to make sure that Swiffer would get fed while we were gone, especially since the front porch was gone, making it harder than usual for her roommate to get in the house to feed the cat.
Swiffer is Kate's long-haired, cross-eyed cat. Two days before we left for Missooula, Pendleton, Soap Lake, all that, the four of us did that thing we call band practice. Kate made dinner while I ate ice cream, Dena poured wine and Lindsey tried to get Swiffer to chase one of the new toys she and Tim had bought for him. It was a feather on a string on a pole, and when Swiffer looked at it to chase it, he only went more blind and thudded into the doorjamb, three times in a row.
"Oh! Swiffer!" Kate said, and picked him up. He flattened like he always does, as close against her as possible, chin on her shoulder, tail switching from side to side. Then the hair chewing started. He chews her hair.

"He's a lover!" Kate says, by way of explanation, "He just wants love all the time." He makes himself as flat as he can, like she's wearing him, and then there's the hair chewing, like whispering in your ear, or a constant promising or praying, or some other act of earnest devotion. Kate says "He's a lover!" and we are all utterly convinced.

That doesn't stop Lindsey from spraying catnip spray on the kitchen floor so that Swiffer will try to eat the floor instead of her boots. He is a devourer, all desire, want cloaked in serious, clingy fluff. Fluff that commits itself to you, from which you do not part, that goes where you go, when you go.
Which is why in the parking lot at Albertson's in Sandy, Utah, Kate says out loud what she keeps wondering, whether Swiffer is getting fed. It isn't until halfway to Missoula that we hear he is but once we do, suddenly everyone is a little more satisfied, because we love to love the lovers.