How It Is These Days 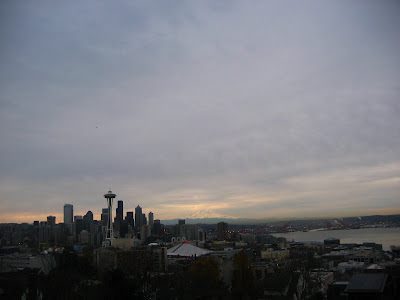 A couple months ago, I read Haruki Murakami's little book, What I Talk About When I Talk About Running. There was something going on with me then, an itchiness, restlessness. I attributed a bit of it to missing my daily walks to work (the commute to the new job is a drive), some of it to... what shall we call it? Not so much lost love, though sort-of... loss of faith in love? Something in that neighborhood. A kind of loneliness I'm not sure I've experienced before. One that had to do with a missing faith somehow.
But that's for another time. The point was, there were some things going on, and I knew I needed something. B and I were at Elliott Bay Books, and there it was, this little book, so I got it. It didn't take long to read, and as I read it, I kept thinking "This is such an odd little book..." I think of Murakami as a kind of fantastical mysterious writer, having read only A Wild Sheep Chase until now, and this book is so simple. Just a little piece about writing, and running.
Still, it influence me. I kept getting this image of carving, of chipping away. It was an image about the passage of time, about effort applied over time. Effort applied to your own being, changing word by word and stride by stride, the person you are. I wanted that.
I've always suspected that I would like running, if I could get over the initial pain of it. In high school I went through a lonely phase of running with a big clunky walkman and god knows what shoes, but I was always afraid that someone I knew would see me running, and I hated that idea. I ran for a while when I lived with Elvis, trying to follow a training regime that prescribed a few minutes of running, alternated with a few minutes of walking. It didn't suit me, and what little running there was converted back to walking.
Part of the problem has always been finding time. This is what you tell yourself when you are not yet ready to find time. After I read the Murakami it seemed obvious that the thing to do was wake up in the morning, and run. So I started doing that, 7 weeks ago. And now I have enough runners in my life that it isn't lonely quite the way it used to be. Tami and I talk about it, and Leslie and I, and of course there's B. But even more than that, there's some way in which I just keep myself company better now than I was ever able to in the past.
And as I suspected, and hoped, the running has been like chipping away at something. I feel better. Whatever was hurting me was like something on me, something weighing me down, and it's going now. What I'm looking for now is some little path to the writing, some clearing that might lead somewhere, that might lead to miraculously finding time for the words the way I found time to run.
Posted by Heather at 10/08/2008

these were just the words i needed this evening. i love you.

Ahhhhh...running and writing and betting at that place inside yourself. You captured it all so beautifully, Heather. I've been really missing my running (it's been a few months) and thinking about how much I really, really need it. Thanks for the inspiration to get out there again. With both the running and the writing.

Love this post - but you already know that, don't you? I keep thinking about what you said about Nabokov and HH's mental decline being reflected in the writing of the second half of the book - like muddy fingerprints on the text - that is your gift. Choosing just the right words, the best words.