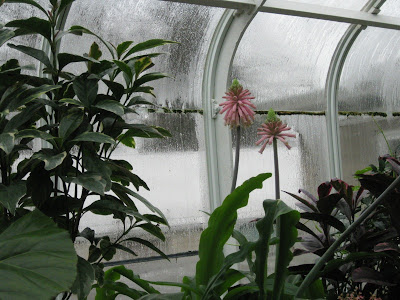 I've been trying to have something to say here, but it's not working all that well. Februarys might just be like this. I'm trying also to find a way out of it, more light, more warmth. The conservatory in Volunteer Park, a walk through Seward Park, hot beverages, warm clothes. But something about February makes me go blank, empty. On Friday I saw so many of my favorite people, and still, there I was, conversationally inept with the people I like to talk to most in the world.
Which is why Mike's dialogue class on Saturday sounded like an oasis to me. Afterwards he said he taught it by trying not to bore me, but of course he never even came close. In the beginning he asked us what we wanted to know about dialogue, and I wanted to say "How not to make it suck," and then "How to make it show up." I just needed to think about people talking to each other, see it, hear what that might sound like. He had us think about what drives peoples speech, what's behind it, and about the ways and reasons that we don't say what we mean, or talk sideways to each other.
But if you find yourself saying, "I don't want to talk about it," as I have been lately, then dialogue dries up, gets reduced to the functional. In class we did an exercise - half the group was given a slip that said something like "profess undying love" and the other half, a slip that said "leaving someone/don't love you anymore," and told to write that speech. No one knew what anyone else had been assigned, and afterwards, one random lover read their part, juxtaposed with another random leaver. People talking sideways to each other, and it worked.
I was a leaver, and couldn't find those words. I kept thinking about the scene in Closer (which has brilliant dialogue) where Clive Owen's character comes home from a business trip and is greeted by his wife who is about to leave him. She asks if she can draw him a bath, he asks why she is dressed if she just bathed. It's all sideways, or underneath, but you can feel everything that's coming as she pours water from the tea kettle into mugs.
I was also thinking about the Updike story, A&P, which I've talked about here before, and how that first-person narrator makes the story all dialogue in a way, but how the whole thing hinges on the manager saying "Girls, this isn't the beach." The first time I read that story, I was in high school, and my favorite english teacher loved it. I didn't get it really, what was so great about this pretty average-sounding guy watching these girls come into a grocery store in their bathing suits. I think sometimes dialogue that is so right is hard to appreciate, exactly because it's so right. It seems ordinary, though now it's clear to me that the voice in A&P is an extraordinary one for being captured on the page so perfectly. And now I see how gorgeous it is, the way it's just this musing until the whole thing kicks off with that line, like a swimmer pushing off the side of the pool.
In the end, I did come up with something because of the exercise. Not a speech, just a little scene. One that ends with two lines of dialogue.
"I'll know it when I see it."
"Like pornography."
Perfect for the break-up story I've been thinking about.
Posted by Heather at 2/16/2009

I love reading your writing about writing. It makes me want to make the time to write. Keep it coming.

I think it's funny when you (and by 'you' I mean any of us) start being observational about your actual conversations.

I think that if you kept a log of real conversations, particularly conversations between people who know each other well, it would be shocking how sideways and underneath they almost always are.

There are times when I get to the end of a conversation and I'll think 'I wish I had a recording of this' because it seems so improbable and probably only half of what I think has been said has actually been said.

Does that make sense?

Yes. Yes it does. But only because I already knew what you were talking about. :-)