This Tornado Loves You* 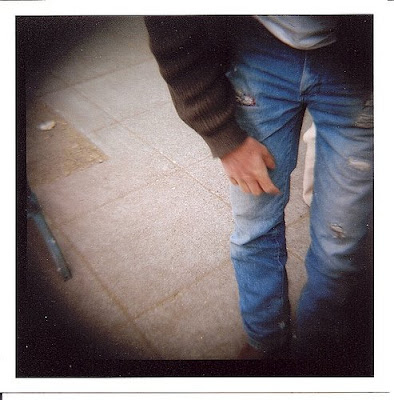 The guys at the camera store have almost got my name right. Today the one who took my two rolls of film looked at me, pen poised above the order envelope, and said "Michelle? No..." knowing already that he wasn't quite getting it right. When I said "Close!" and told him my last name, he said, "Ah! That's where I was getting the M." The other dark-haired guy hovered near where we were talking, grinned and said "Still playing with that Diana?" and then called me the Diana Princess after I said yes.
I've said before that I've been thinking about photos, and writing. I've also been thinking about the blog. For a while now, my posts have been trickling off, and while I still like being here and am even still inspired by the format from time to time, I'm thinking it might be time to make some changes to how I do things here. I think those twins are excellent candidates to take over this space and be Shameless Self-Promoters, The Next Generation, with weekly updates from Auntie.
For myself, I'm thinking about starting a photo blog, a place to update more regularly without the pressure to write. I could write there or not. I realize that, technically, I could do that here, but I don't think it would feel right to me. I'd like to keep this a place where I can write once a week, more update-type posts, like it was originally meant to be when this blog was started so long ago as a place for us to keep in touch from coast to coast.
Still thinking about it all, and of course when I get it settled for myself, this will be the first place I come to report.
* If you haven't heard this song by Neko Case, you should! Gorgeous.
Posted by Heather at 6/22/2009

Wherever you go with your photos, do let me know. I LOVE your photos. They make me feel like I have absolutely no business holding a camera. The way you use light and angles to capture moments and feelings and personalities is really nice. Who needs words? :)

You can't pass the buck to me like that! ;-P

I want pictures too!

I can! I'll still update here once a week, and I'll link to photo blog.

Soooooo, postings have been about once or twice a week lately. Just stop feeling like you aren't doing enough. You both are busy!
I think a photo and list blog would be very interesting. Some captions would be nice. I always wonder where you are when you take a great picture. I might want to go there some time too!
XOXO,
Mummy