The Town with a Pseudonym 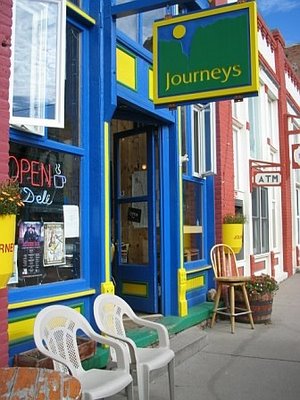 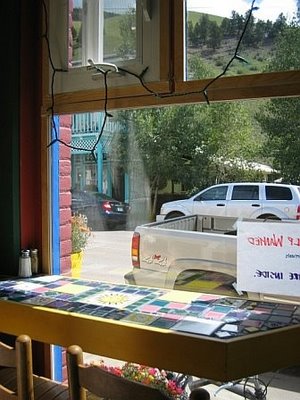 I've been there now, to the town I'll be calling home for two months. It's the kind of town where, after being there 3 days, you walk down the street and people you've never met say "Hi, nice to see you again" as they pass. There's a bar called Tommyknockers that has a dance floor, and one year during a ranch workshop, you could have found Tami there, two-stepping with the mayor. In a town this small, you might want to proceed with caution, though, and I can't help but hesitate to step foot in a place that share's it's name with a Stephen King novel, given the number of people who bring up "The Shining" when they hear about my upcoming adventure.
Since there are only about 400 people in the whole county, it's likely that any given morning will find 1-2% of the population hanging out in the coffee shop in town. If you go into Journeys and talk about Pam, by the time you get back to the ranch, she will have heard what you had to say.

Yep, in spite of it's size, this town does have a coffee shop. It's no Fiorre, with their organic coffee, vegan pastries and dragonfly patterns poured into the milk. But they do have something that I wish Fiorre did - egg sandwiches for breakfast! The Mike's Breakfast is an egg with ham, cheese and tomato on a toasted bagel.

What do you think it would take to get a breakfast named after me?
Posted by Heather at 8/23/2006

Hmmm. What would it take? The good thing about this being a small town, is that you probably won't have to wait until your first book is published, to have someone name a breakfast after you. So I recommend ordering something in a slightly neurotic way every morning, until they just decide to put it on the menu so that you won't take up five minutes of their time every morning, explaining what it is exactly, that you want. I think you should avoid being named after a scramble. At the very least, if it has to be eggs, a delicate, but complicated omelette, would be my recommendation.

I think you just have to ask for something very specific, and easy to make, that is not already on their menu.

And order it every day for a month.

I agree that you probably don't want a scramble named after you. That's for the crazy people.