More Love for the Coffee Shop 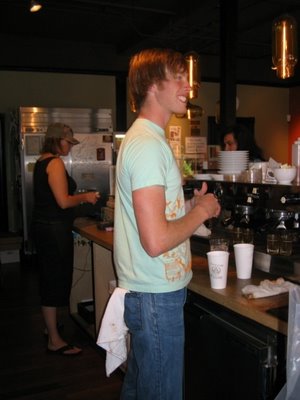 This post is one of those posts that has been rattling around in my brain for a while now. I took the photo back in August, I think it was the weekend Nate visited. We went into Fiore for coffee, and Shack and Andy were working so I snuck a picture of them.

We'll start off with a little secret - this isn't the first time Andy appeared in the pages of this blog. There are a few other minor mentions here and there, just like there are not two but three photos of Bobby, if you know where to look. As long you know that secret, we might as well just get the rest out on the table right now - like how I try not to think about how sad it would be if I came back from CO and any one of the baristas I love was gone, how I loooove my coffee shop, and how I actually consider it My Coffee Shop and am not embarrassed to admit that.

I think there’s a lot to love about the place. There's the fact that it really is gorgeous inside, well taken-care of and comfortable and the art is often very good, and of course the coffee is good. But my love for Fiore, it's not because of the furniture or the art or even the coffee. All of that stuff? Well, maybe the way it looks and the nice art make you feel like you are justified to be paying more for a latte there than you might somewhere else. Kind of like shopping at Barneys. But that's another story.

Really, all the trappings do is let you walk into the coffee shop comfortably the first time – they won’t be the reason you decide you are perfectly happy to go back there every single day. That part is about the people.

My real love for that coffee shop started with Andy, Shack and Bobby. How could it not? Those three have charisma.

Right off the bat, I just have to apologize to Shack for this post. I am really not trying to make those two be any more fond of themselves than they already are. Andy and Bobby know they are cute, they know that we know they are cute, etc. And I'm sure there are moments when that might get a little old for her, and no doubt, if she reads this, then the part of her that sees them as little brothers will be going "Oh please." or even "Eyew" right about now.

But I know that Shack also knows how baristas in Seattle are sometimes the equivalent of bartenders in other cities, and with these boys, that is going to manifest itself in the form of girls fawning over them, men wanting to run with them etc etc. And we all just have to live with that, since it's really the natural order of things and anyway, it is sort-of entertaining, isn’t it? I think so. Anyway, she can't fool me, I know that she’s got her own brand of celebrity as well. It's just not always as obvious. I suspect she is a woman who doesn't care to be obvious, most of the time.

Which is one of the reasons why, of the three of them, Andy is probably going to be the one you notice first. He just puts himself out there that way. Gregarious is certainly a word that comes to mind. Not to mention tall, and then there's that smile that I have described in the past as "blinding", and I mean that in the best possible way, and yes, he is good-looking. And I don't even usually like blondes. For Andy, I will make an exception. So would you.

One of my girlfriends who shall remain nameless said that when she first went into Fiore, she had a hard time forming the words when Andy asked her what she wanted to drink. I've seen it happen to other women as well. Strong women, older women, you name it. Sometimes, Andy smiles at them and they just go all stupid.

Okay, but in case you start to think he's some kind of statuesque-Trojan-prince-like boy who could cause even the goddesses to argue amongst themselves, well… I’m sorry, but he kind-of is. Or at least, as close to that as you're going to find these days. However, Andy is also... I don't know how else to say this, but... sort-of goofy. And frankly, I thank god for that, because he might be intolerable if he wasn't. The goofiness and the apparent sweetness? In my opinion, they are the true keys to his charm, the things that make all the rest of him so appealing even after you've seen him several days a week for a year. And Allison, he shares your birthday. This might explain the goofiness.

He’s cute in a very obvious way, and friendly, asks you what's new, tells you a little about what he's been up to. People like that. He comes across as genuine. And after you've been going to the coffee shop for a little while, you feel like you sort-of know Andy. At least, you know enough to say some things about how nice he is, you know about the basketball, and maybe he’s mentioned his girlfriend to you a couple times, and it isn't very long before he doesn't seem like a stranger any more. Having said that, I have no doubt that there is a lot more to him than I know about. It's just that it's nice to know him the way I do, in this everyday kind of way, where he smiles at me every time I see him and I smile back and am always glad to see him, no matter what else is going on in my world. Back in April, that was a very valuable thing.

Shack? She has a very different kind of charisma. She has the kind of charisma that makes you curious about a person, but that keeps you from being sure you could get away with asking anything. Truth be told, I could have written a post about Andy months ago, because I have known for quite a while what I would say in praise of him. I also know what I love about Shack, but the thing about her is that I know I don't know her. So writing about her seems a bit presumptuous of me. Forgive me while I finally risk it anyway.

If you asked me to guess who at the coffee shop knew my name first, I wouldn't hesitate before saying Shack. I know for sure that she was the one who noticed that every time I got my latte, I added a sugar to it, and who came up with the innovation of putting the sugar in the shot before the milk was added. She was also the one who trained Andy to do the same thing.

Just to be clear, I don't really care all that much whether I put the sugar in, or they do. But I like that Shack noticed, and I suspect she knows that, and I also suspect that she knows that I don't really care that much about whether the sugar is put in or not. The point is, we all like to be noticed, even in our smallest interactions, and as a barista, Shack gets that. Shack’s way of being a barista isn’t about her, it’s about you.

Which is probably why when she’s at work, she isn’t the kind of person who would ever make anyone more stupid than they already were. This means that when Shack works with Andy, it has a sort of balancing effect. With her there, I am less likely to leave my keys by the napkins or, you know, drive away with the latte on the roof of the car, or maybe, send anyone a text message that says “You boys are so cute”, which will then be answered by something like “Tell us something we didn’t already know”, which will leave me rolling my eyes. Not that I’ve done any of those things. I haven’t. That was Susan’s glasses case, and I didn’t put it there.

Actually, no, really, I never have left a latte on top of my car. Are you kidding? I’d sooner leave a baby there. No offense to babies.

But like I said, the fact that I am always delighted when I see Shack does not mean that I feel I know her at all. I'm sure it's not an accident that Shack is almost always wearing both a hat and glasses and often an item of clothing that is either camoflauge or black. She's in cognito, undercover. Even so, she can’t hide that great red hair, her wry sense of humor, her outstanding laugh, or the general impression she gives you that she would be the kind of person who would have your back in a pinch. Maybe I’m wrong, but she sure seems that way from a distance.

Of course, one thing I can say for sure is that she makes a mean latte.

Now I can only hope that she will be flattered enough by this post to not kill me for publishing it. Don’t worry, Shack, no one really reads this blog anyway. Seriously.
Posted by Heather at 10/10/2006

This post is hilariously, epic-ly long and smacks of "my novel is sitting over there on the table under two balls of yarn".

Not that I don' t love Snack and Shandy all ready.

Oh, AND! I need to go knit some socks now.

Do you mean that Andy is 'run around with a bucket on your head like when you were three' goofy? Or 'dress up in Star Trek uniform and paint yourself green' goofy? Or just 'smile like you know something goofy but don't want to say it out loud'goofy?

Cause I can play goofy any old way lady.

You will just have to see when you use my apartment at the end of November! The coffee shop is waiting for you.