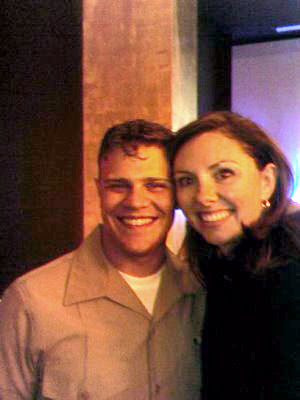 I am not crazy... Doesn't he look like Matt Damon?
So, I don't know if you remember this post from last year, but that time has come again. The heavenly days known as Fleet Week, when the streets of Manhattan are awash with fresh-faced young military personnel in uniform.

Any hoo, we were out Wedneday night for another co-worker's emancipation party - at the same bar we were at last year - when lo and behold, a group of marines walk in. And who was with them, but my favorite Matt Damon look alike marine from last year!

Apparently, he had so much fun that he decided to come back to the same bar on the off chance that we might be there. Since we've been to that bar maybe twice since that night, this was more of a risk than he may have realized. However, fate intervened and there we were.

Anyhoo, he and his lads had many drinks bought for them - it seemed that every suit in the bar used to be a marine and wanted to buy them a beer or a shot. And, of course myself and my friends were just as entertaining as we could be... 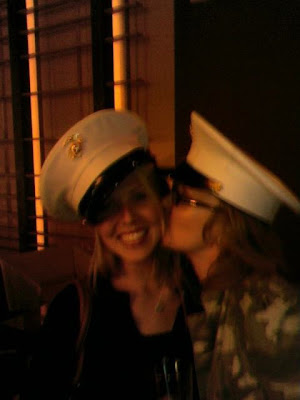 See, aren't my ladies entertaining?
I gave Gary (Matt Damon look-alike) all sorts of tips on where to take his friends for drinks (LES and EV - duh) and also where to take his girlfriend - who was coming that weekend... and he told me the secret to why all those boys in uniform always look so neatly-pressed.

They wear garters that attach their shirts to their socks!

Anyhoo, it was a lovely evening, garters and all, and I am happy that I finally have some photographic evidence.

Happily, Gary is getting out in six months and will be attending culinary school in Philadelphia - or I would've tried to make plans to meet up again next year.