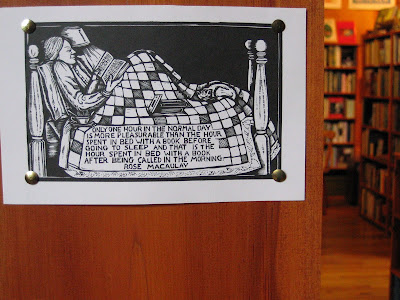 Sign at Olde and New England Books in Newfane, Vermont
The weather has been odd since I arrived here at the ranch. Hot the first day, in the 80s, I think. Then after Pam left yesterday, the afternoon went dark and windy, still warm but you could feel the rain and electricity moving in. Then came the thunder and all the dogs wanted in the house and some girls in a Subaru came by to use the phone because they were worried about a group of campers who they thought might have been caught in the bad hail storm they experienced on the hills behind the house.
All day I felt like the weather. Changeable, moody. Unsettled. I wondered how I felt those first days on the ranch in October, what did I decide to do right away? I knew I could go back to the blog and look it up but didn't. Instead I just puttered around, made myself coffee with the little stovetop maker, unpacked a bit, still thinking about how short this trip will be. Just two weeks this time. I wish it was longer.
I thought about writing, of course, but didn't want to. I thought about a conversation Pam and I had the night before, at dinner, and how she said she often gets stuck for about a year when she's a hundred-something pages into a book, as I am. I realized that the phrase "put it aside" is an okay one in my mind. I can handle putting it aside for a while. It didn't hurt that Pam looked at me and said "It wouldn't be a bad idea. Something needs to happen, and you don't know what it is yet," and smiled.

So instead of writing, I settled in with the new Michael Ondaatje novel, Divisadero, and read half of it while Fenton, depressed at Pam's departure, slept on his dog bed near me and twitched and shivered with dreams. I love Ondaatje's writing. I love the way he immerses you in a world that he has obviously spent some time researching, like forensic anthropology in Anil's Ghost, or gambling in this new one. His books never focus on just one of those things though, usually there are one or things that I think of as technical for each othe characters, whether it's a drug habit described in detail, or a profession, or a kind of music, or a location. Each of the characters in this book have a certain closed-off quality, so that reading about them has this satisfyingly secretive feel to it. I find myself wanting them to interact with each other, wanting the three main characters, who start the novel together and then move away from each other, to come together and collide again.
After reading most of the afternoon, I fed the dogs and made some pasta for dinner and a weird rhubarb sorbet for dessert. I stayed up late, as I often do here, knitting and watching the Fabulous Baker Boys and organizing things on my computer. Finally I went to bed and read for a while before falling asleep.

Don't you love the saying on the little postcard in the photo? I woke up this morning and read again, fell asleep again for a while before finally getting up for the walk with the beasts.

Yay!!!! I am so happy to see the book stuff. I feel like some important person who get's to read an exclusive book review for important people only. :) I love the way you talk about books... and now the way you WRITE about books. If you keep this up, you're going to sell a lot of other people's books. Enjoy your time at the ranch. I'm sooooooooo jealous.