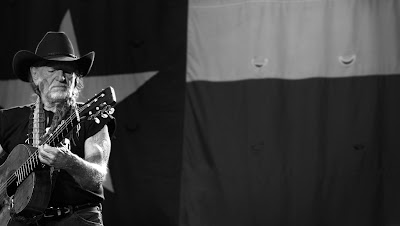 I don't know who brought the humid, seventy degree weather. I was expecting rain, and cold once the sun went down, so I brought surgical drapes and blankets and a jacket for Jess and hand-knit socks worn inside sparkly wellies.
Willie brought what he always brings. Whiskey River, twice, and the most generous spirit of any performer I've ever seen. And I saw the Avett Brothers last night, who hop up and down and call the name of your city, and get 97% of the audience singing and tell the other 3% that they understand why they just might not want to sing, so I think that's saying something. But Willie smiles and throws the hat off his head and gives you a little wave that you swear to god was just for you, and then he walks from one end of the stage to the other, shaking hands and signing posters and hats and dolls and photos and ticket stubs and even the occasional guitar. We were still in our seats in Row C when we saw Chris Zasche stretching one long arm towards Willie, palm out in a gesture of love and trust, and we knew that hand would be taken, and we cheered when it was.
Driving there, I realized that I couldn't imagine any more what it was like to see Willie for the first time. But all day Jess had sent me glee-filled text anticipatory text messages and once we got there she hopped up and down in her seat and then afterwards, as we all crept out of the parking lot, she sent happy lovey text messages. Sitting next to me during the show, Kate looked at me with eyes wide and said "I can't believe I'm here!" Walking through the filed later, Jason put his arm around me and said "You've done a good thing in the universe," and all those things reminded me of the first time I saw Willie, at Beacon Theater in New York, with you, Ali! Way up in the balcony, where it was feverishly hot but still spine-tinglingly joyful, for me.
That was where I got the idea for tonight. A dozen tickets, all mine, to give away to people I love, who love Willie. Third row, right in the middle, most of us. I actually felt guilty because Chris Z and Tim and Lindsey and Jesse had to sit in row G, but that wore off once I saw them right up next to the stage for the last 4 or so songs.
Lindsey brought a big smile and long legs and that navy blue vest that I think looks so cute on her. Jessica brought enough twenties to cover me and Ryan, who brought a big fat camera and took photos I can't wait to see. Jenn brought an appreciation for and curiousity about my motley crew, and Jesse brought his birthday, which we will all keep sharing over the next few days, right on into the weekend when the Sunset will be invaded with all the people who want to tell him Happy Birthday right to his face. Kate brought Jason and together they snagged a hat that Willie threw from his head to the aisle next to our row. That hat's mine now, my new running hat. Nothing distinctive, just a black baseball hat that says Jones Soda on it, but I know where it came from and how it came to me, and that outta be enough to keep me going for at least twenty minutes at a time, don't you think?
Michael brought Old Granddad in a flask, a damn fine outfit and an even better smile. Zasche brought the best Willie outfit of all though, an old tour shirt and his tall good looks and I don't even know what else. He might have beat Ryan's headband and sneakers look, I'm not quite sure yet. Least but not least, Troy brought his good-looking self, a wry smile and some surprising musical insights.
All of which only goes to show that of all the things I brought, the most important thing of all was just exactly the right people.
Posted by Heather at 8/29/2008

You are a force for the good.

Somehow, I'm getting both chills and warm fuzzies just reading about it.

Sounds like a super fun night. Though I still marvel that Willie has the stamina to put on the shows that he does. I barely had the energy to make it through the show, and I was only in the audience!

by the way ryan never paid me back! I owe him nothing yet take take take haha!